ActionAid has teams of people working around the world. You can visit any of our websites to find out what we're doing and how you can get involved.

After 13 years of walking round the streets of Koton Karfe on bare hands, Muhammed is finally happy to own a wheelchair. At the age of 12, Muhammed lost his legs to a seizure caused by injection to the wrong nerve while treating a mild illness in the community’s local clinic. “I was not born like this. It was injection that made me a cripple”. He sadly narrated.

Life became a little more difficult for Muhammed and his family during those years. He had to start learning how to live with his new reality, learning how to walk, but this time, with his hands instead. Being the first child of his parents, he was saddled with the responsibility of taking care of this mother and five other siblings especially after his father died just before he graduated from senior secondary school. Despite his disability, Muhammed dabbled into menial jobs, including sales of call cards which enabled him to fend for his family but was never enough to get him a wheelchair.

In Koton Karfe, political violence is commonplace; over the years, youths have been used as political thugs mainly because of unemployment, idleness and poverty. But not Muhammed, he was determined to set good example for his younger ones and show that he can be productive despite the setback. He disliked it so much when people looked at him pitifully and often advised his siblings to stay away from bad influence and peer pressure. Thus, it didn’t come as a surprise to many when Muhammed was selected as one of the beneficiaries of the skill acquisition programme under ActionAid Nigeria’s SARVE II project where he is actively learning shoe design and production; an opportunity he views as a life changing one.

Muhammed remained consistent at his skill acquisition training and he was further selected to participate in ActionAid Nigeria’s 2020 Youth Peace Camp in Kogi State.  The Peace camp aims to build the capacity of young people in peace initiatives through mentorship, entrepreneurship development and series of activities designed to promote social cohesion and unity. Excited about the prospects of networking and learning more to develop his shoemaking business plans, Muhammed arrived at the camp determined to actively participate even though he had no wheelchair. Little did he know that all the participants have been observing him in the camp while he participated actively in all the camp activities including, the early morning drill. Moved with compassion, other participants from diverse tribes and religion mobilised resources and purchased a brand-new wheelchair to aid his movement and hasten his plans of becoming a successful entrepreneur.

“I am happy to be here at the 2020 youth peace camp; I have made new friends and now they have even bought a wheelchair for me. This has thought me that I can live in peace and look out for my brothers and neighbours from other places without considering their cultural or religious background. It has taught me to be kind to others. I am proud of ActionAid Nigeria and PIBCID for this initiative” he stated.

Mohammed left the camp as a peace ambassador, no longer walking with his hands. He remains optimistic about a better future as he prepares for his graduation from the skills training in December 2020 after which he and his cohort will receive start-up kits for their business.

The SARVE II project is funded by the Global Community Engagement and Resilience Fund (GCERF). 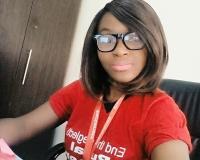